in my never-ending quest to keep my house clean, i have had to lay down some ground rules for my kids. some rules i’m flexible with, others are iron-clad.

and the most iron-clad rule ever is – no one is allowed to eat food in any room except the kitchen.

now just because i have this rule does not mean that my kids ever listen to me. which would explain why i ultimately had to rip  out the carpet in MY bedroom and put down a hardwood floor.

apparently my children think that MY bedroom is just an extension of the breakfast area, and it took only a few years in this house before they managed to completely destroy a brand new berber.

so, we recently went on a very lengthy vacation, driving from houston to florida. if you have ever done this, you know what a completely unfun experience this can be without proper preparation. anyway, after 2 long days in the car, we checked into our hotel and immediately went swimming. a few hours later my kids were starving and begging to eat.

“mommy, we’re SOOOO hungry! can we please go out to eat?” they pleaded.

“mommy’s too pooped. i have a better idea. let’s order room service,” i offered.

my little princess, the old traveling pro, said nothing. a little frown crossed my son’s face.

“it’s where you order food on the phone and they bring it to your room,” said princess matter-of-factly.

it was very quiet for about 5 seconds as my son’s expression changed from one of confusion to sublime realization.

“I WANT ROOM SERVICE!” he screamed and took off running toward our bungalow by himself.

all my years of threatening my kids not to take food out of the kitchen have been in vain. for the remaining days of our vacation my son insisted he was hungry every night, regardless of whether we had eaten dinner, and promptly called down himself for a cheeseburger, fries and chocolate milk, which he proceeded to eat in bed off the tray.

ok, so i did bend the rules a little, but it wasn’t MY bedroom, and we were on vacation. plus, in terms of what you can find on hotel bedspreads, i can assure you, a little mayonnaise never hurt anyone.

i have had to institute a new rule at the household this week. and this new rule is: peeing without opening your eyes is not allowed.

why do we need this rule? i’m not entirely sure, as i was not actually there to witness what directly preceded the incident. however, the only rational explanation i can come up with for my son to have completely pissed the floor AND the wall while directly standing in front of the toilet was that he was trying to use the force. 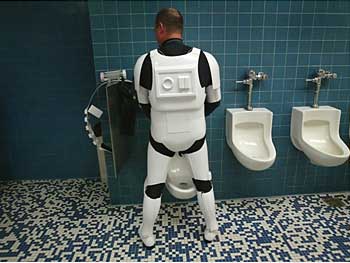 this is a 7-year-old boy who has been potty trained since he was 2. who knew this rule was necessary? certainly not me. as a girl, the rules of peeing are pretty much unwritten, and provided your ass has already made (and keeps) contact with the toilet seat, any manner of free-styling (hands-free, eyes closed, whatever) is completely acceptable.

so about 30 minutes later i hear a blood-curdling scream coming from my bedroom. i raced into the room only to come face to face with nothing. slowly i scanned the room…and my gaze stopped at the top of the 6-foot-tall headboard, where a little face and ten tiny fingers clung between the massive wooden structure and the wall. “help mommy!” the little face pleaded.

after three strong tugs i was able to pull him free and after he was safe, he cried, “i don’t want to die mommy!”

anyway, not to belabor the obvious because i’m sure you know where this is going, but we have had to instigate rule #2: no one is allowed to run across the headboard of mommy’s bed or else they might fall in the crack and die.

star wars analogies aside, there were a few lessons learned last night. first, imaginative play is all well and good until you have to clean up your own errant pee. and second, climbing the headboard of mommy’s bed can be every bit as dangerous as navigating the central core of the death star to shut down the tractor beam, especially for the tiniest jedi knight.

well, it’s that time of year again. it’s december and the tornado that is hannukahmas has begun at my house. the dates of hanukkah are actually determined by the hebrew calendar, so this puppy moves all over the place, and it can fall anywhere between late november to late december.

hanukkah came early this year, which is actually good, because when hanukkah and christmas coincide i pretty much suffer from chest pains for the entire month of december. there is only so much decorating and shopping and

candle lighting and praying and cooking and fun STRESS that i can handle at one time.

many people assume hanukkah is the “jewish christmas” but in fact, it is not. hanukkah is not really a major jewish holiday, but a minor one which celebrates a miracle in which god made one day’s worth of oil burn for 8 nights (he should do the same for my electronic bill).

somewhere along the way, the jews must have felt sorry for the little jewish kids who didn’t get a visit from santa claus and wanted to do something, but wanted to offer them an alternative which still preserved their “jewishness.” not to be outdone by the christians, they decided that instead of one big day, the jews would take hanukkah and turn it into christmas times 8.

i hear my neighbor’s kids asking my children, “wow! you get presents for eight nights? no way?! lucky! what a gyp!” so yes, we’ve managed to take our little holiday and make all the other neighborhood kids jealous. nicely played. every kid wants to be jewish during hanukkah.

anyway, the crazy thing is that because i was raised with santa coming to my house, i haven’t actually been able to go cold turkey… so it looks like hanukkah threw up all over christmas at my house. the place is a mish-mash of menorahs, dreidls, candles, gelt, mistletoe, wreaths, garland, stockings and miniature christmas trees all swathed in blue and silver tinsel, and twinkling blue and white lights in our front yard, accompanied by a giant 20-foot tall, blow-up figure, which features the holy trinity – santa, frosty and rudolph. and yes, my kids get gifts on christmas as well. so sue me.

personally, i have no inner conflict with celebrating both. show me where santa shows up bearing gifts along with the magi and i’ll gladly pull down that plastic yard art.

there’s just a warm fuzzy feeling i get each year as the holiday approaches that has to do with my childhood memories and that’s something i want to give my children, even if it’s only better behavior through guilt. as a child, i distinctly remember worrying about whether or not i had been good enough for santa’s annual visit. and the closer it got to christmas, the more my mom would play the santa card. apparently, the effects have lingered. i still worry.

i haven’t been a perfect girl this year, and i’ve even broken a few minor commandments (mostly of the coveting and taking the lord’s name in vain type). but overall, i think i’ve been pretty good and i’m hoping santa has something for me. and truthfully, the kid in me doesn’t really want to stop believing in the magic of the fat man in the red suit.

and if he decides i don’t deserve a stop, there’s always next year.

my boyfriend has a new movie coming out. i will watch anything that this man is in. and here’s why:

i don’t really think any explanation is necessary, apart from the obvious.

however, before anyone accuses me of being involved with jason (mr. statham if you’re nasty) strictly because of his ASSets, there are many other things about him that you should know, which make him extremely interesting.

it could be the english accent, and the fact that before he became an actor he was a true bad boy, a london street corner con man, hustling stolen jewelry to tourists. his big break came when guy ritchie cast him in lock, stock and two smoking barrels, after he convinced ritchie during an audition to buy some worthless fake gold jewelry.

it could also be the fact that he was an olympic diver, and a model, and that he trains in mixed martial arts, and is an accomplished kick-boxer, and does most of his own stunts. or it could just be the abs…yes… very definitely the abs… sorry, where was i?

anyway, in most of his movies he plays some type of cynical anti-hero, from the transporter movies, which were so silly that they were really good (thank you tivo so i can replay the shirtless motor oil fight scene over, and over and over…) to crank which was so silly… it was actually just pretty silly.

plus the man can drive. and being somewhat of an auto aficionado myself, i appreciate a man who knows how to work a stick.