it’s been a while since i did a flashback friday post and today, i’m going to go way back….to when i first started blogging, which was, oh about november.

originally, i wrote this back when i was only getting about 10 hits a day (and about half of those were my own) and i didn’t even get a SINGLE comment (aside from my sister a mere 3 months later), which can do serious damage to a fragile blogger’s ego. good thing i’m not sensitive.

however, this post continues to provide my biggest source of residual hits, all from googlers looking for rediculous 80s fashion pictures, so i think it’s worth a re-post.  there’s a bit of self disclosure going on in this one, and i’ve given myself a fair amount or sh*t, so feel free to knock yourself out.

yes, the 70s were a groovy decade, but unfortunately, my experience with the 70s was more brady bunch than saturday night fever, so i feel a little gypped. but these great photos got me thinking, if style in the 70s could be reduced to an homage to white pantsuits, terry cloth, and chest hair, would history be kind to the 80s?

i began searching the internet for 80s fashion and realized that most people, like myself, are hiding their skeletons. so i decided the best place to go look was in my own closet.

i spent several hours trying to find where i had hidden the old photo albums and yearbooks, and after i found them, i remember why. despite my hopes of finding footloose, flashdancing girls that just wanted to have fun, i discovered what was really fashionable in the 80s was looking like your grandparents.

to say we looked ridiculous is a modest understatement. but we were just buying into a lifestyle that the clothes represented. similar to how white suburban kids are deluding themselves into thinking that running around with their pants hanging off their asses and calling each other bee-yotch makes them gangsta.

anyway, after looking at these pictures, i have decided that what the 80s were all about (MTV videos to the contrary) is clothes as birth control. there is nothing overtly sexy about any of this and frankly, it’s a wonder there was any sex going on at all. which may actually explain the massive consumption of alcohol which generally preceded any physical contact.

so, i wanted to share these pictures with you. keep this in mind while you’re looking at them. i live in texas. it’s freaking hot here… all the time.

these pictures were in a section labeled “yep, they’re yups.” there are a lot of things that amuse me about this whole era, including the fact that in lieu of actually being a yuppie, you could just wear the clothes and pretend to be one. but what’s most amusing is that the word yuppie (initially coined as a demographic term which stood for young urban professional) later came to be used almost exclusively with the word *fucking* preceding it. 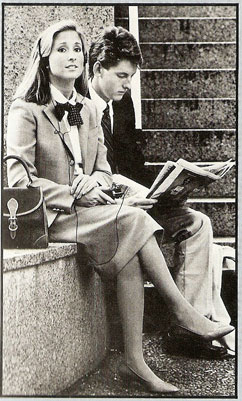 these girls are covered from head to toe, except for the tramp on the left who has exposed her knees.

the only thing that saved this poor girl from a britney spears moment is about 8 inches of fabric.

nothing says “hot” like peter pan collars, poofy sleeves and high-waisted pleated pants. no matter. this guy is just happy because this is the closest he’s ever getting to these girl’s clams.

and because black and white just does not do it justice…

if the clothes said virginal, then the makeup told an entirely different story. these girls did not believe in subtlety…or using a mirror. 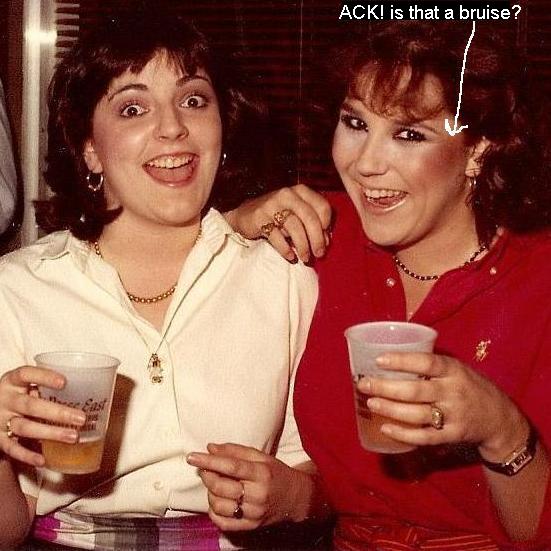 sailor suits were really in…and not just for 6 year olds.

nope, this is not an 80s party. this is vintage 80s college partying. wearing shorts instead of a skirt at a kegger allowed much more freedom and ensured that you were comfortable. plus if you drank too much beer and passed out on the patio furniture, no one could see your underpants.

i realized a certain amount of self outing was going to be necessary to allow for a full appreciation of this phenomenon. anyone who knows me knows that i never pass up a good opportunity to show off my rack, but back then, i had my priorities all screwed up.

do not ask me what the eff is up with my hair. i have no freaking idea.

aviators were the coolest.

i seem to recall that this type of pant was called a “go to hell” pant. which basically meant, “i’m going to wear these pants, and if you don’t like them, you can go to hell!” the more obnoxious the better. the guy wearing the “go to hell” pants (and the pornstache) was a four sticker (meaning he had a IV after his last name) and is now a gynecologist in the greater houston area, which i unexpectedly found out after picking a specialty physician from my healthcare provider. awk-ward. 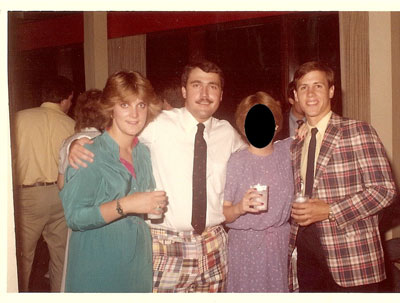 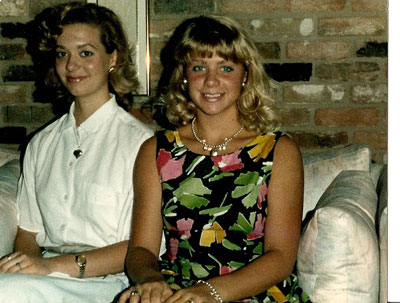 wearing long skirts is completely impractical because they seriously inhibit your mobility and you can fall flat on your face. which makes them perfect preppy attire when you’re going to someone’s ranch to drink a lot of liquor and shoot off firearms. 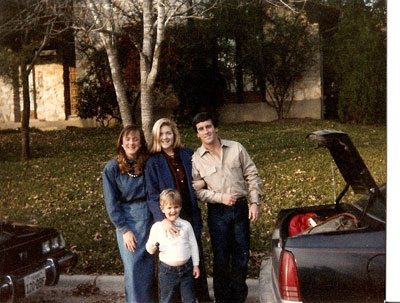 nothing says road trip quite like white opaque hosery. 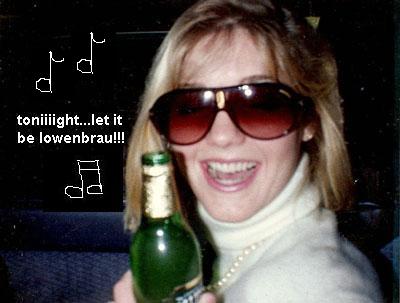 and finally, it’s completely apparent from the look on his face that my date was not amused that i wore clothes under my toga. i never saw him again.

15 thoughts on “flashback fridays – coming out of the closet edition”